Rule 19 of the AIAC Arbitration Rules provides for summary determination of a claim, counterclaim or defence, either in whole or in part.

The tests for summary determination are laid down in Rule 19.1 as follows:

The arbitral tribunal has to decide whether to allow or dismiss the request, in whole or in part, no later than 45 days (unless extended by the Director of the AIAC after consulting the parties) from the receipt of the final submission[3].

Under the Fast Track Procedure, the expected timelines for the arbitral proceedings are as follows: 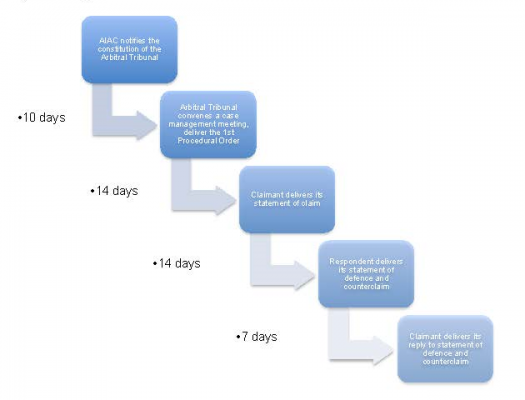 The parties can expect the closure of proceedings no later than 90 days from the delivery of the first Procedural Order.

To cope with the recent changes brought by the pandemic and the consequential restrictions in place, the AIAC Arbitration Rules clarify and acknowledge the use of technology to remotely participate in the arbitral proceedings[6]. That would include attending or appearing at meetings, conferences, deliberations or hearings by using a video conferencing platform, telephone or any other appropriate means[7].

Rule 1.4 expressly stipulates that the use of third-party funding to finance a party’s share of the costs of the arbitration shall not affect nor preclude the adoption of the AIAC Arbitration Rules in an arbitration, unless provided otherwise by a relevant law or an order of any court of competent jurisdiction.

(5) Provisions for bifurcation of hearings

Rule 13.5 stipulates the powers that may be exercised by the arbitral tribunal, one of which is that it may direct bifurcating proceedings.

Rule 44.4 further requires the parties to seek the undertaking of confidentiality from all those that they involve in the arbitration, including any authorised representative, witness of fact, expert or service provider.

In the event of any breaches of confidentiality by a party, the arbitral tribunal has the power to take appropriate measures, including issuing an order or award for costs or damages[11].

Besides, it is interesting to note that, in order to promote transparency and development of law, Rule 44.6 provides that an award may be published by the AIAC with the express written consent of the parties, whether in its entirety or in the form of excerpts or a summary, subject to the redaction of all reference to the parties’ names and other identifying information.

Rule 9(7) provides for the procedure for the appointment of the arbitral tribunal by multiple parties.

If 2 or more arbitrators are to be appointed, and multiple claimants or respondents expressly agree to act collectively and jointly nominate an arbitrator, the following procedure will apply[12]:

(8) Consolidation of claims arising out of multiple contracts

The claimant shall submit a consolidation request to the AIAC where a single notice of arbitration is delivered to the respondent in respect of claims arising out of multiple contracts between the same parties[15].

Rule 22.5 lays down the factors to be considered by the Director in deciding whether to allow the consolidation request. If the Director dismisses the request, the claimant is required to issue separate notices of arbitration pursuant to each contract and submit separate registration requests (previously known as ‘commencement request’)[16].

For the purposes of technical review, the Director will draw the arbitral tribunal’s attention to any perceived irregularity, not only as to the form of the draft final award and computational errors, but also include any matters relating to the procedural history and general content issues, without affecting the arbitral tribunal’s liberty of decision on merits[17].

DISCLAIMER: This article is for general information only and should not be relied upon as legal advice. The position stated herein is as at the date of publication on 9 August 2021.